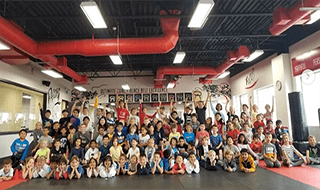 In the prevailing world, teenagers are facing enormous challenges. Most teenagers spend most of their time playing various video games and surfing the internet. Thus, an enhancement in the sedentary culture has been observed.

In order to survive and thrive, teenagers needs today to have a complete focus on their mind and body. Parents can relieve this worry by enrolling their children at OMAC martial arts classes as our training classes under Grand Master Kim’s supervision, a 9th-degree black belt, will help teenagers in changing their state of mind and it brings self-discipline and confidence in them. Here I am going to narrate down four rigid reasons why your teen needs martial arts training.

It is during young age that adolescents first play with hazardous conduct. Encouraging teenagers to increase sociability and the culture of learning new skills brings confidence in teens. These practices also help them be optimistic in their lives, which leads to self-esteem.

In this age of young one, there is usually a change in their social circle, and risky behavior may lead them to drink or drugs. Therefore, to import self-esteem in teenagers and inculcate self-confidence, martial arts training is considered very important.

It increases their level of fitness

Obesity is perhaps the worst thing that happens to humans. It is the root cause of many diseases. According to the World health organization report, most people globally die due to cardiac arrest because of obesity and increase in their cholesterol levels.

Four times increase has been observed in the number of obese teens in the past thirty years. Healthy habits should be encouraged. Martial arts are the perfect choice that helps teens in mental development and brigs discipline and confidence in their lives.

Generally, chubby teens should focus on their individual performance rather than team performance; thus, martial arts are the best choice and keeps them moving physically and mentally.

Each year four crore people become the victim of different crimes. They generally don’t resist because they have no skills in self-defense. It is most of the time, teenagers that are victims of these crimes, according to a report of the Centers for Disease Control.

When teens learn the physical moves of self-defense, they will become mentally strong. They will feel good, and when someone feels great, he/she looks great. By learning the tactics of self- defense, the fear, and danger of crimes will obliterate.

During the training classes, when learning the Martial arts, the best thing that teens learn is teamwork. The practice of teamwork helps teens throughout their life.

Also, during teamwork, the teenagers become social and a sense of acceptance towards their fellow one’s fosters. They start respecting each other.

Teenagers build good character and learn how to deal with their fellow in their society. The skills of self-defense in which teens learn from martial arts teach them to combat bullying also.

Feel free to contact OMAC martial arts if you want to enroll your teens in our training classes.